The Day When Mumbai Stood Still

Hi,
I am Dhaval, a web developer. Don't freak out i wouldn't be talking technical. Some people out of utter intelligence gained {probably from the ancestors of web 0.0} believe that tech guys don't have more interesting Garbage {then their object variable GC garbage collectors } to talk about. Well here's how the story goes. It was Friday evening when i went insane to accept a ticket. Well exaggerating it to the core i was offered "Sabse BADA ticket IPL match between Mumbai Indians and Royal Challengers Bangalore". 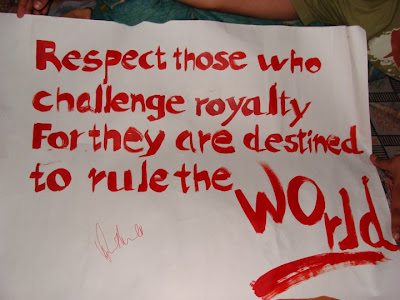 I was disappointed. I mean who the hell on the world would miss a perfectly cool Saturday on neatly done sofa sleeping off with Wafers and Pepsi to watch a match where croud nearly outrun the 8:30 am local from Mira Road Station. I mean density of people would be approximately 1000/sq.foot or minimum 996/sq.foot.
Match was at 8:00 pm Judging by my nature and record that i had set probably some 19 years ago I WAS LATE. I mean 8:30 i reached Eros cinema 2 mins of walking distance, i was at the line swapping my SABSE BADA TICKET. where i heard voices of audience "whooooo". Well it sounded like people were having some group praying sessions going on. I entered the stadium
like millions of lights on the ground. Despite of being anti-cricket i couldn't help my self get excited by the passion of cricket that people had in them. After like eye-googling millions of people finally i was lucky to find my friends. I had to cross Mount Everest{MI supporter some 6 inch tall with two flags in both hands and cheeks glowing with Indian Flag. Good News :: Patriotism Still Lives } 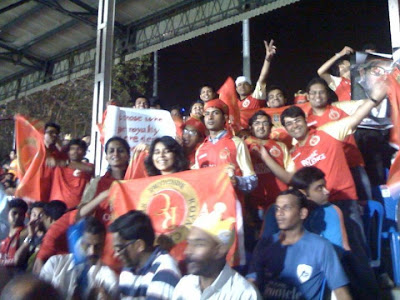 I finally found my seat{or what was left of it.} I said "WT F People actually do pay Rs. 1000 to sit on a chair that is on the eve of collapsing." The beagle rang. and people started shouting. "Sachin Sachin " ."We Want SIX". I could see Sachin Tendulkar Man himself very tiny on the pitch. His every single run scored was like Glucon-D or Boost to Mumbai Indian Supporters.
Suddenly Sachin hit "4" . Stadium went wild. People had their heads glowing with some florescent blue light. We had plastic sticks thrown in air. Cheer Leaders dancing. "One two three four..." Well i found some motivation to stay some more time on stadium. Every Single ball was a heart beat. Despite of having Master Blaster in team. MI wrapped up with a total of 151. Well lucky number i say.
Now came our chance to dance.RCB came to bat. Manish Pandey{Girls find him cute.}
came to bat. Now it was revenge time. Even we danced raised flag's danced with (poster) Katrina. whenever manish would hit a boundary or punish the ball to six. We were back with vengeance. "Jumbo Jumbo". "R" "C" "B". Well Kallis was the Man hitting 66 runs gotta chance to see a real six up in the air outside the stadium. That was really really cool. Well we could see Sanath Jayasurya fielding at our end. People :"Sanath Sanath ". he would show a hand and people would go crazy crazy. Well i can say Bhaji is truly famous with audience So goes with dravid, malinga, Anil Kumble. But well hey RCB won the match Kallis Man of Match.
We had a very pissed off and disappointed croud. 3/4 th of stadium supported Mumbai Indians and it was a heart break for them to see their team loose. Well for me it was cool. "The only problem was after 10:00 pm cheer girls had stopped dancing". I donno who the heck in the world wanna sleep at 10:00.
Well i enjoyed cricket that day and i can definitely say it is not just the game of 22 gentle man playing on field but also game of millions of people playing off it.
Posted by Unknown at 11:27 AM